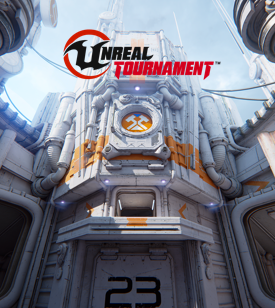 The classic in a new guise, even if the pre-alpha of this title appeared in August 2014, UT4 or Unreal Tournament 4 served more as a graphic demo of the famous Unreal Engine 4 for a long time. This milestone of a multiplayer shooter is really playable and the servers are filling up slowly. Unreal Tournament 4 (UT4) is not only interesting for nostalgics, because the games play easy and the action is really fun. For g-portal.com, UT4 servers are a fixed part of the Gamecloud and for a weekend with mates the perfect balance to play a round or two.

The game is free-to-play for everyone. For us it is a clear MUST HAVE for every shooter fan, because UT4 is just a lot of fun. Fast action battles paired with the Stunning Unreal Engine 4 provide enough variety. g-portal.com is one of the world's first game server providers to host a Unreal Tournament 4 (UT4) Server.

Unreal Tournament 4 server in the high-end prepaid solution by g-portal.com

You can rent your own Unreal Tournament 4 server right now. Prepaid and in the Gamecloud. That means you have no contract and you can switch between various games in our Gamecloud at any time. Don't want to play Unreal Tournament 4 anymore? You can use your slots for a Quake Live server instead and, if you want, you can simply switch back to Unreal Tournament 4 on the next weekend. Full flexibility and immediately online. That is the g-portal.com Gamecloud.