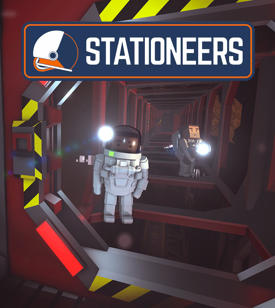 Rent your own fast Stationeers server

Will Dean Hall bring out the next mile stone of gaming?

Behind Stationeers is someone well known: Dean Hall, the inventor of a complete new genre with DayZ. Now with Stationeers he will attack games like Space Engineers with his new game, which looks quite polished for an early access game. The visuals of the game seems inferior, the focus is definetly on the gameplay itself. The story is easy to tell: the player is building his own space station and can explore new worlds later to build whole factories.

Stationeers is Hardcore-SciFi-Sandbox at its best

The possibilities in crafting and building are huge, the complexity seems endless. You will have devices for live support, food production or medical stations - everything will help you to survive in space. The details are insane to create a space simulation with enough features to be played for a long time. With your own Stationeers server from GPORTAL you can conquer space, start a life with your friends! Who will build the best base, the biggest space ship?

You can rent your Stationeers server up from the 12th december 2017 in the GPORTAL Gamecloud. As usual 100% prepaid and no binding contract. Full control of the costs, no bad suprises. Choose your slots and run time of the server yourself, changeable at any time. The administration can be done completly via webinterface, also from your mobile devices! Your Stationeers server wont have any lacks in performance or service, the ultimate game server.