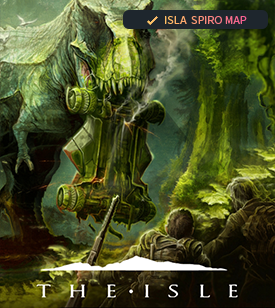 The Isle Isla Spiro - the new Map for 245 Players!

The Isle is an innovative game concept that started in 2015 and has become increasingly popular over the years. On a The Isle Server takes the player the role of a dinosaur. Since you start as baby dinosaur, you can either chose between a Herbivore or a Carnivore, that beats through the prehistoric fauna of the Cretaceous. Eating or being eaten is the motto of the game, as Herbivore (vegetarians) naturally primary plants. The hunting behavior in The Isle is incredibly realistic and does not get boring even after hours.

T-Rex or Brachiosaurus, multiplayer as it should be

The looks of The Isle makes are by tje UE4 Engine, which although the game already appeared in 2015, was constantly improved. In the meantime, there are more than 30 selectable dinosaurs breeds, plant and carnivores that are very realistic. Fighting on a The Isle server takes on the multiplayer server, the own dinosaur can suffers fractions, flesh wounds and other bruises, has to regenerate and gain by fighting on experience and strength. T-Rex, Hypo Rex, Hypo Spino, Raptor, Velociraptor, Utahraptor, Carno, Spino, Giganotosaurus and many more, the player in The Isle can choose from three factions: hunting, prey, and survival. The Isle is a lot of fun and will delight dinosaur lovers.

The Isle server hosting - in the Gamecloud!

The Isle Isla Spiro server hosting from 10 to 245 players in exciting multiplayer food orgies, so many player slots are offered by The Isle Server based on the UE4 Engine. Instant online, 100% prepaid and in the Gamecloud. Quick and easy to pay via Paypal, Paysafecard or Credit Card. For users from the Netherlands or Poland, we also offer the online services iDeal and przelewy24. Subscription contract was yesterday, no waiting times and anytime switchable between the various g-portal.com Gamecloud games. You don't want to play The Isle anymore? Then just switch to a Conan Exiles or ARK server. For high-performance we relies on Dell's fast SSD server hardware with high-performance processors from Intel. Full flexibility and instant online - the GPORTAL Gamecloud