An overview of the current ARK maps

ARK: Survival Evolved is still a very popular game and therefore it is not surprising that there are already 12 maps that provide variety again and again. In this blog article we present you all 12 maps in a small overview and give you information about the most relevant features of each map.

In 2015, the first map of ARK: Survival Evolved was released for Steam and Xbox, followed by PlayStation in 2016. Therefore, the beginning of the game's success story was created.
The Island is, as the name suggests, an island with several small islands around it, surrounded by water.

On The Island you can find several resources, but also encounter creatures, some of which are monstrous. Likewise, the weather and the temperatures in the different regions, whether mountainous or more rustic, may complicate your life on the island.

Features of The Island 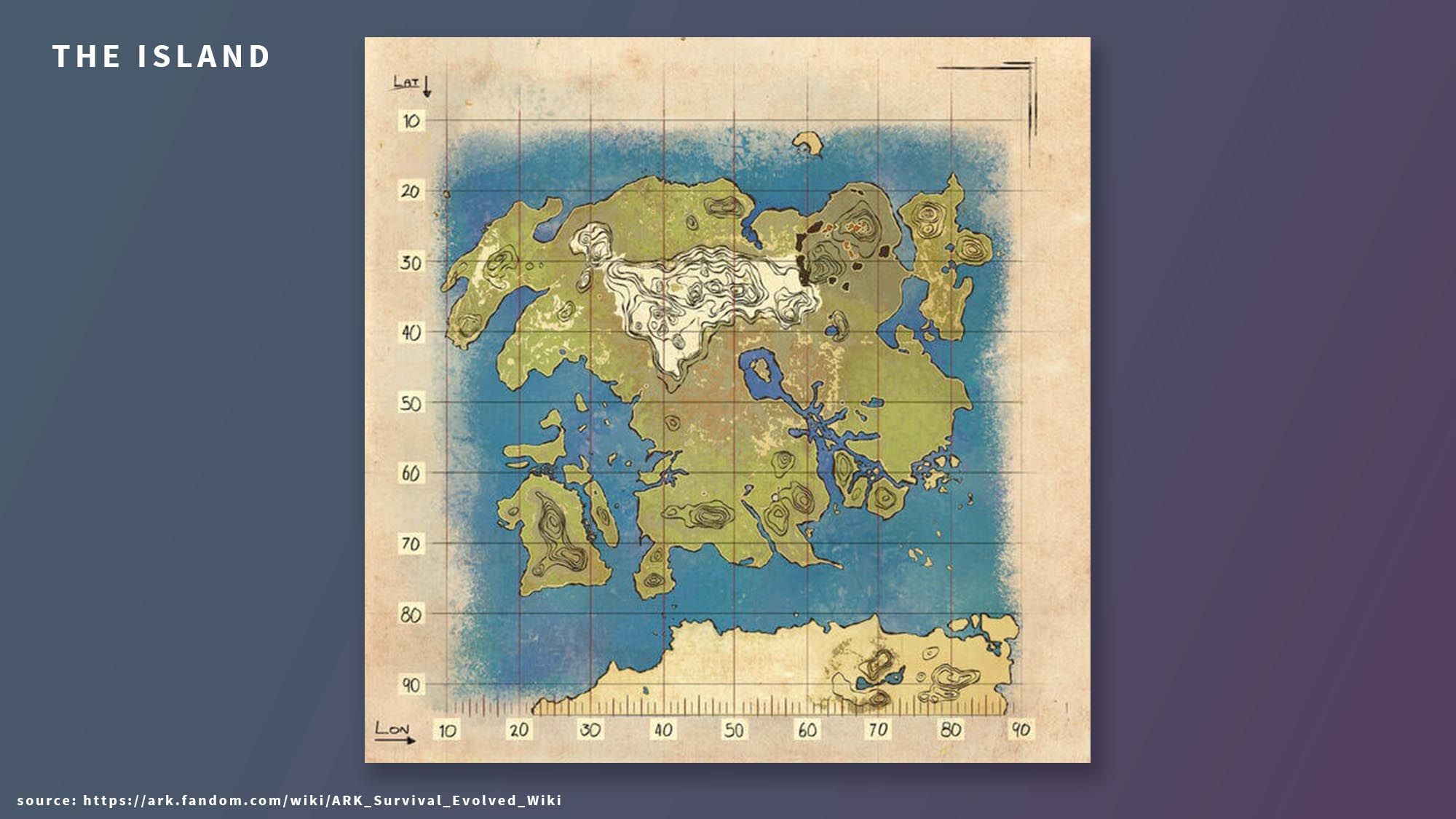 2016 also brought the next map directly to the market. The first official non-canon map The Center is characterized by its volcanic island in the north, the two underwater domes and the huge floating island in the western center.

Since the map is quite easy to play and has a lot of resources, you have the opportunity to test and optimize your skills first. Whether it's taming, farming, or exploring and researching, The Center is the perfect environment for you.

Features of The Center 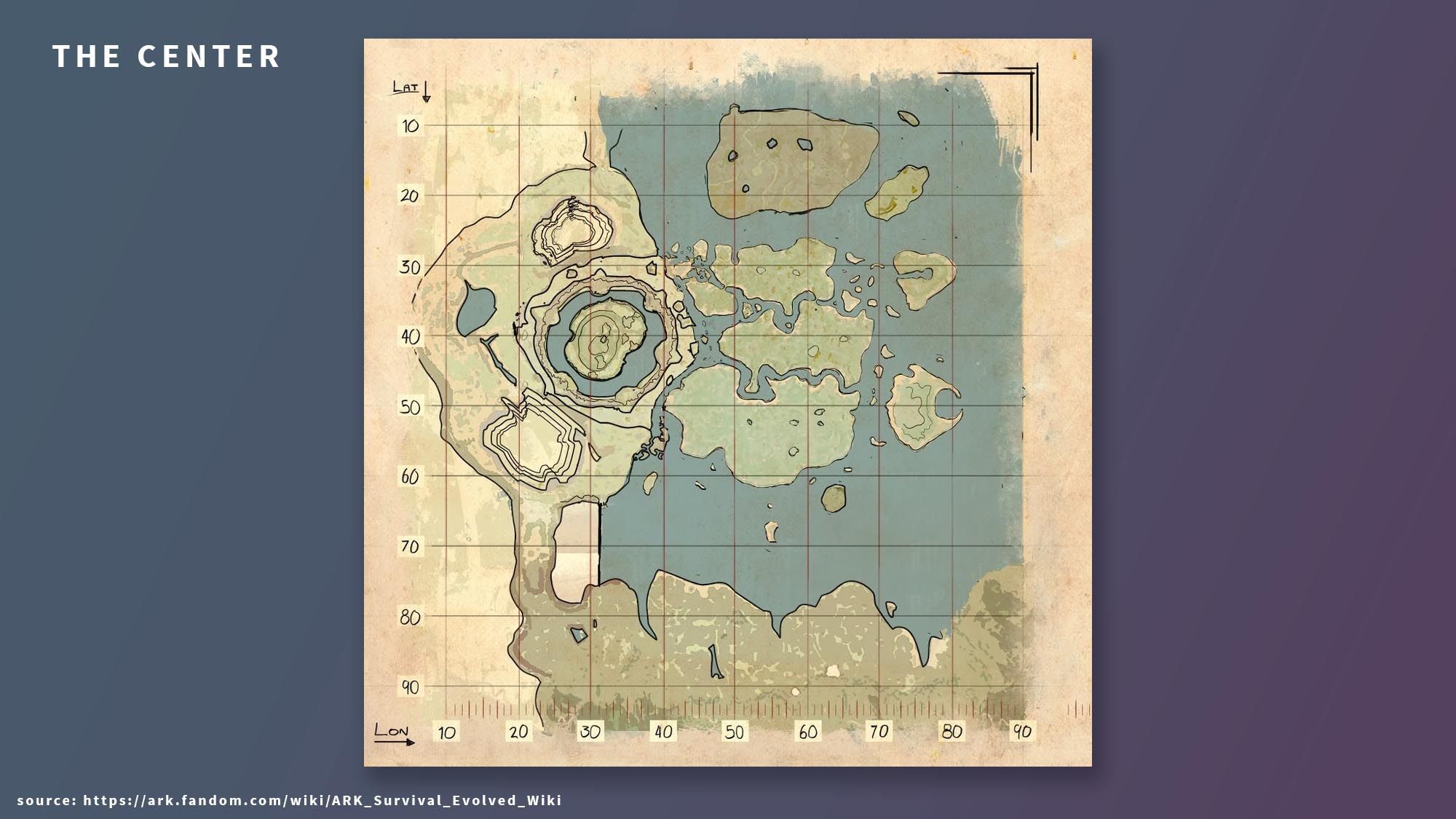 In 2016, the first DLC also found its place in ARK: Survival Evolved. Scorched Earth is a map in a desert setting. This ensures that it's rather difficult to play, since you'll have to face the risks of intense heat, which can cause a heat stroke or enormous thirst, for example.

In addition, possible sandstorms will severely reduce your vision, and thunderstorms will make it impossible for firearms to shoot and temporarily shut down electrical devices. 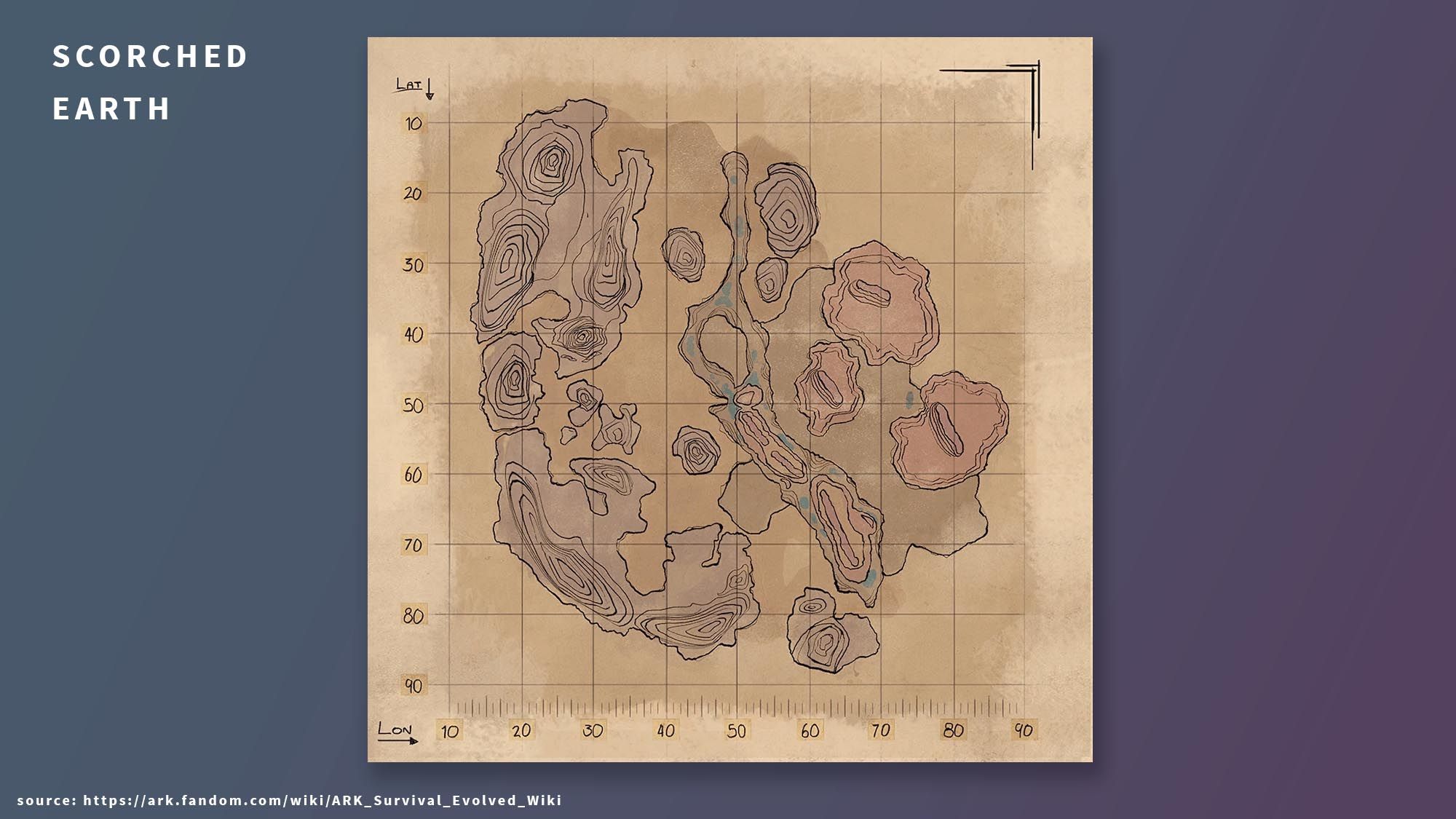 This map was released in 2017 for ARK: Survival Evolved.
Huge and a bit of everything - this is Ragnarok. Mostly good weather, occasional storms, a volcano that can erupt and let meteorites rain down, characterize this map.

Sunken Viking boats and ruins are two other highlights of Ragnarok. With all the possibilities you have on this map, it's an excellent exploration map to get to know ARK: Survival Evolved well and build up your skills. 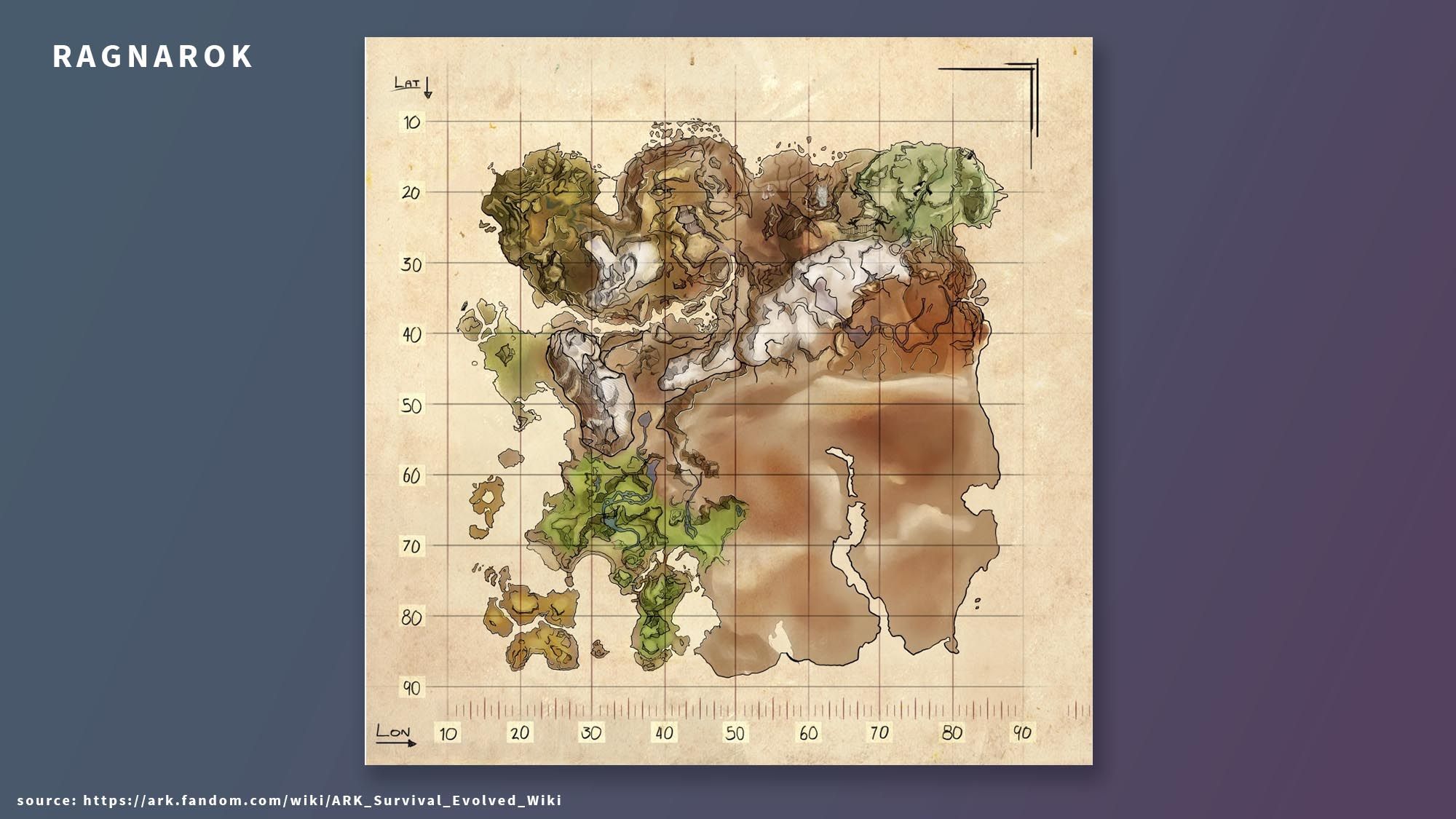 The map came into the game at the end of 2018.
Explore the corrupted world on Extinction and investigate the devastated planet. Uncover the secrets of the past and save the ruined Earth by finding the keys to redemption.

Extinction is a whole new kind of challenge. Geysers shoot up, meteors fall from the sky, and electromagnetic waves render items like the GPS useless. Mutated creatures are extremely aggressive and gather into a pack when they smell danger. Genesis: Part 1 was released in early 2020. Five different biomes make up the entire map of Genesis: Part 1. A swamp area, a water area with several small islands, an icy landscape, a volcanic landscape and even the moon can be explored on this map. 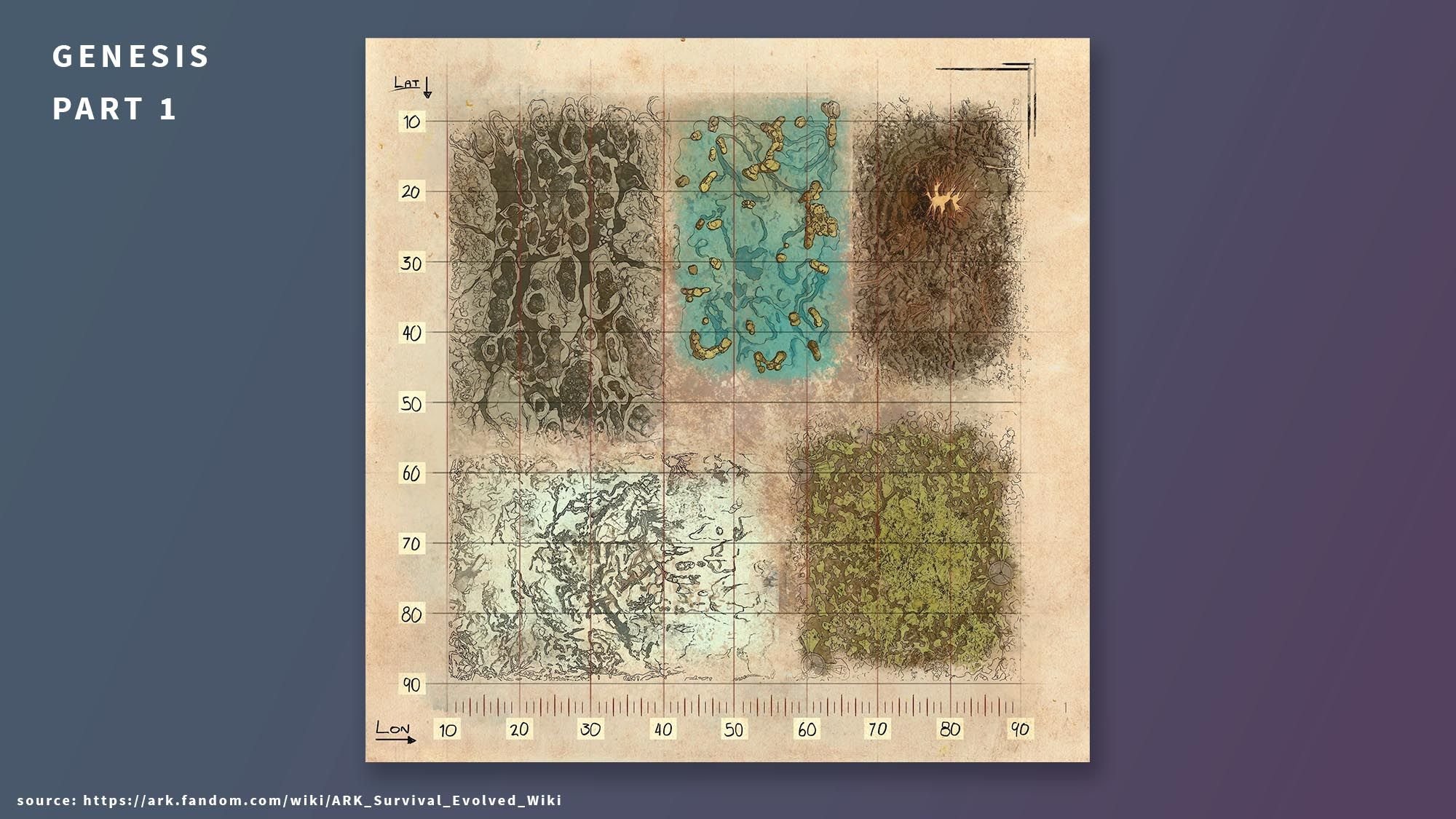 The sequel to Genesis: Part 1 was released in 2021.
Genesis: Part 2 is the biggest map in ARK: Survival Evolved so far and consists of a gigantic spaceship with two rings, which is divided into two main areas. The separation is formed by a kind of bridge called "Tek Trenches".

One ring is "The Eden Zone". A rather ordinary map with all the essentials you need to survive the other ring: the "Corrupted Gardens". Created by Rockwell and completely twisted, this region is additionally populated with creepy creatures. Crystal Isles was released in 2020 and got its name from the large crystals that can be found all over the map. You can explore many different biomes on Crystal Isles and with them the creatures, monsters and resources that are offered.

A huge beehive in the form of a cave filled with honey that is the home of large worker bees, a collection of floating islands, or an island that is constantly devoured by thunder and darkness. You can discover all of these in Crystal Isles. 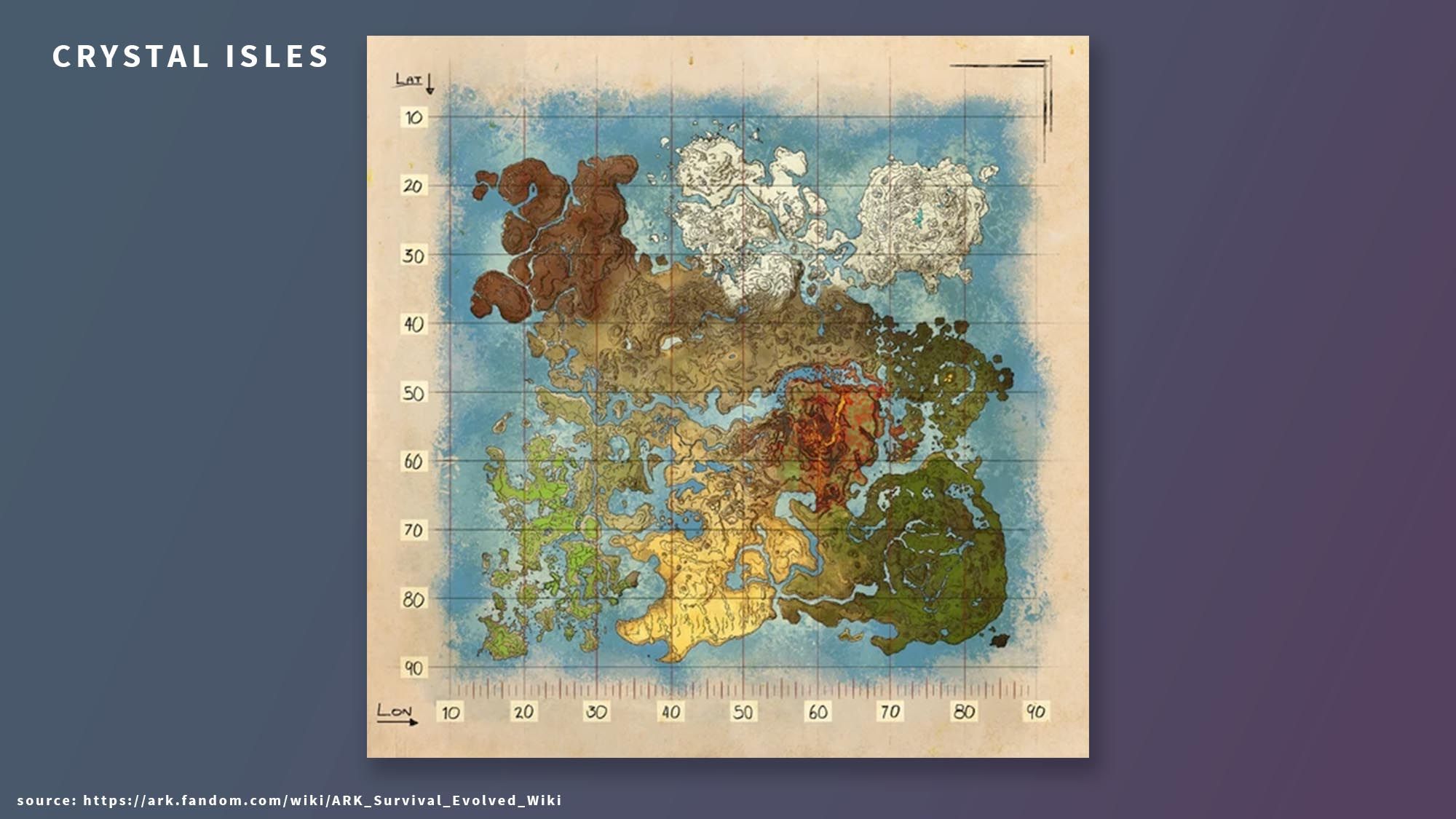 Aberration came into the game at the end of 2017 and drastic changes follow in ARK: Survival Evolved thanks to this map, which consists mainly of underground biomes, since the world is contaminated. The sun emits radioactive radiation, causing mutations in some creatures and destroying organic life.

To survive in Aberration's huge cave systems, you'll have to get used to new tools such as the grappling hook and gliding suits. It is also advisable to carry a compass or a GPS, so you don't get lost in the dark twists and turns of the caves. 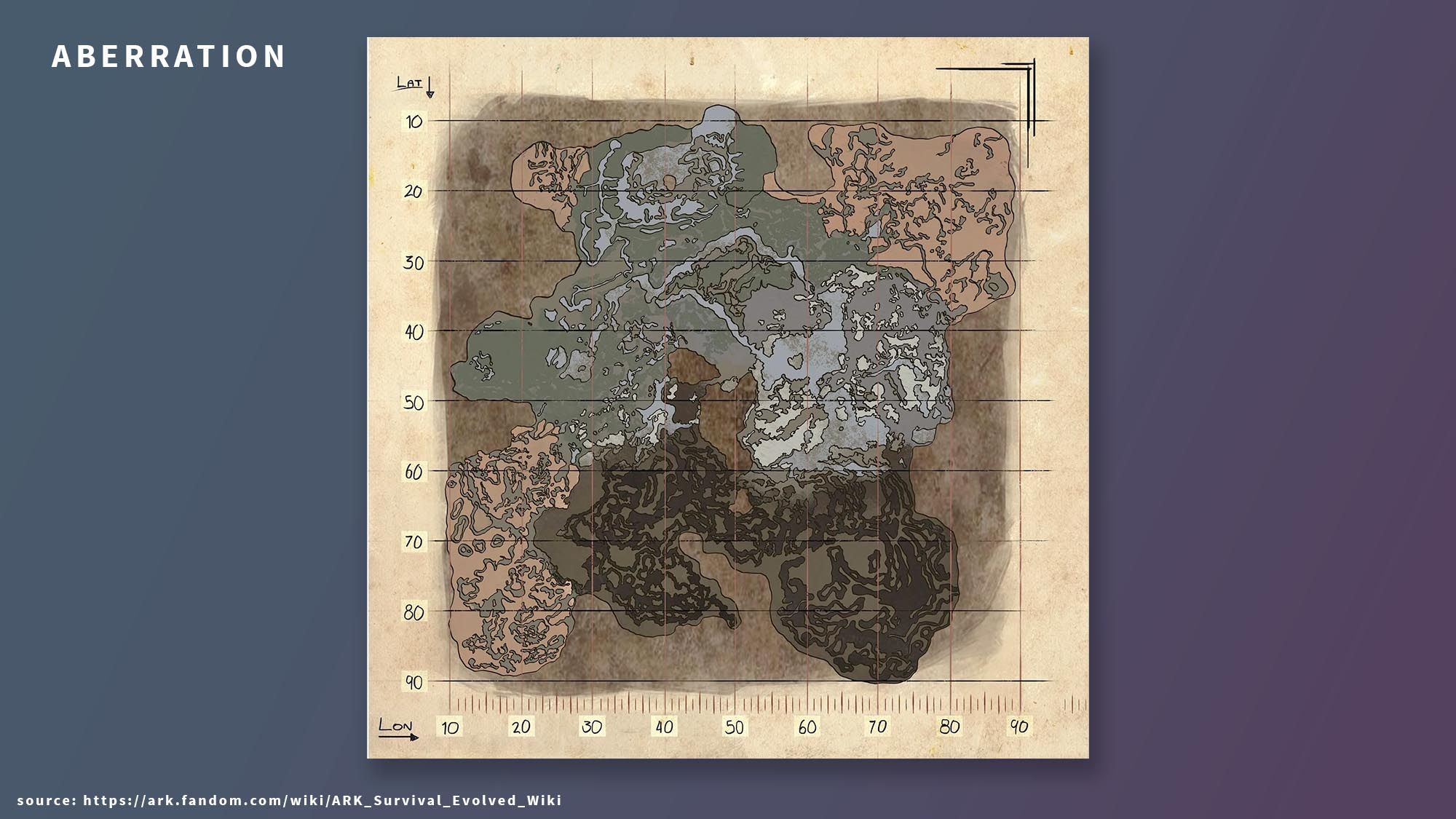 The all-rounder amongst the maps was released in 2019. Valguero offers lush green jungles, icy snowfields, heated deserts and much more. Experience rainbows, auroras and even shooting stars, and enter the radiation area called "Unknown" mindfully.

Find the new "Forsaken Oasis" arena and face three bosses at once. Additionally, you can find the new dinosaur "Deinonychus". The dinosaur attacks mainly when you are near its nest and is known for its nimble nature. At the end of 2021, the current penultimate map found its way to ARK: Survival Evolved. Whether islands, mountains, forests or ruins, you will find almost everything on Lost Island. If you've already spent a few hours in The Elder Scrolls games, you'll notice that the map's developers took an example from the continent of Tamriel.

On the very large and spacious map you can meet three new creatures. You'll find the Amargasaurus, the Dinopithecus and the Sinomacrops on Lost Island, and each of them has different weaknesses, strengths and benefits. 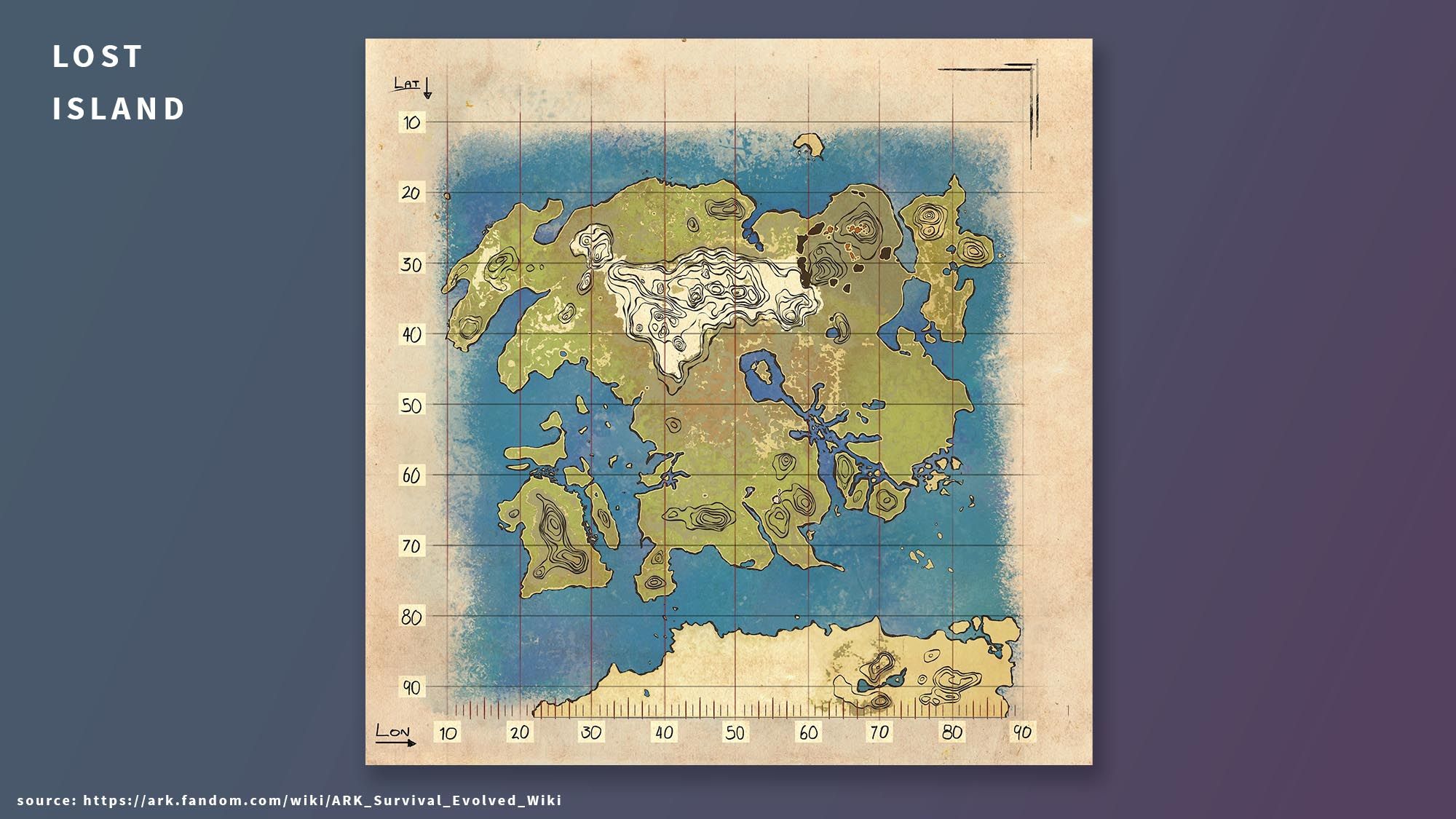 Fjordur was released in mid-2022 and is the latest map. The newest map for ARK: Survival Evolved offers a breathtaking new world with its Nordic mythology setting. Fjordur features numerous cave systems and three areas that you can explore with the connected portals.

Fjordur consists of four islands: Vardiland, Vannaland, Bolbjord and Balheimr. Whether it's ice and forest landscapes, a gripping volcanic island or slimy swamplands, the vast map with its Nordic mountain scenery offers a lot, especially for the eye. Now that you have a current impression of all ARK maps, you are surely interested in trying out one or the other directly. GPORTAL offers you each of the 12 maps and so you can try out on which map you feel most comfortable.
Rent your own GPORTAL ARK: Survival Evolved server here, easy, no strings attached and available immediately.