ARK Taming: These four creatures will help you get started

Unique and gigantic creatures await you in the survival smash hit ARK: Survival Evolved. Some of the creatures have helpful abilities that can make your life easier and ensure your survival, especially at the beginning of the game.

With the Taming of the creatures you can make them your companions and use their properties for you. Here we will introduce you to four of the many creatures that have helpful traits and give you tips on how to tame them. If you want to know more about Taming in ARK you can click here and check out our Taming Guide.

These creatures you should tame first As a gigantic eagle that mainly reflects the behavior of a vulture, the Argentavis is the largest bird on the island. It is one of the birds of prey that hunts its victims unerringly, grabs them with its enormous claws and kills them.

If you get too close to it or provoke it in any other way, it will hunt you as well as its prey and chase you over long distances. However, once you have tamed the Argentavis, it will serve you as a flying mount, which is truly a good companion and supports you with its saddle as a mobile workbench.

How to tame the Argentavis

You can tame the Argentavis either with or without a trap, depending on how much effort you want to put in. Once you have shot the eagle unconscious, you can feed it Meat or Kibble. To maintain unconsciousness, you should use the so-called Narcoberries as an anesthetic.

In order to be able to use the Argentavis as a mount, you need to craft the saddle. In order to do that, you need at least level 62 and 21 engram points, and these are the resources you will need to create it: 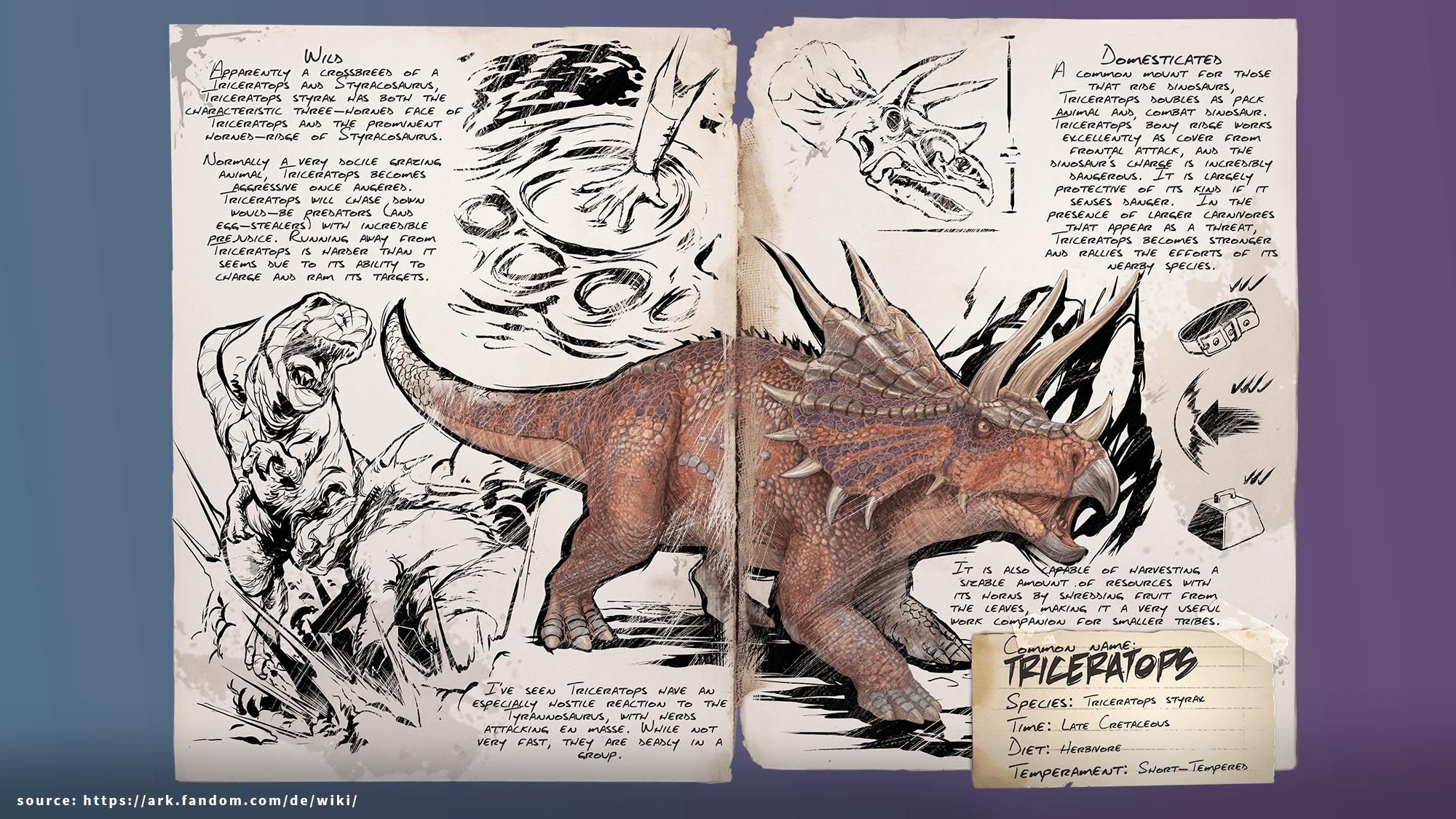 Actually a very leisurely and calm companion, but if you should get too close to him or annoy him in any other way, he will want to flatten you without mercy. This is the Triceratops, also called Trike.

As a walking tank, it will defend you in battle, and its bony crest in particular provides good protection against frontal attacks. Once you've tamed one, you can use it as a mount and beast of burden that can even fight a T-Rex at high levels.

How to tame the Triceratops

Since the Trike is a herd animal, other Trikes will also attack you if you attack one of them, so act with caution. Either shoot at the trike's body while it's running, or place yourself on a rise and shoot at it from there.

Once the Trike is unconscious, feed it Mejoberries or Kibble. Use Narcoberries to keep him unconscious. Make the saddle for him by having at least level 16 and 12 engram points. The following resources are needed: When you meet a raptor, you have to be very careful. This dinosaur is insanely fast, agile and above all very aggressive. If you have startled a raptor, you better take your legs in your hands and hope that he does not catch you in the jump with his foot claw or his razor-sharp teeth.

Since raptors usually appear in packs of 2-4, you must be aware that even if you have killed one, all the others will probably attack you as well. If you have managed to tame a raptor, you have taken a big step and have a loyal and very popular mount by your side.

How to tame the Raptor

To tame the popular dinosaur, you'll have to be clever. Since he will attack you as soon as he catches your scent and you get too close, it is best to pin him down with a bola. However, you should not underestimate its speed.

Once the Raptor is immobilized, it's best to shoot a tranquilizer dart into its face. Feed him Meat or Kibble as soon as he is unconscious. If you notice that he wakes up again, give him Narcoberries or Narcotics to keep the stun.

Another and easier method is to grab the Raptor with its light weight with a large flying dinosaur and then drop it into a cage where you can tame it. Level 18 and 9 engram points are needed for the saddle, plus the following resources: With Scream and Spit

The rather small and slow Dilophosaur should not be underestimated in ARK: Survival Evolved, especially at the beginning. His shrill screams scare away many enemies, but of course he also quickly attracts attention to himself - and thus also to you.

Its bulging ruff is the distinguishing feature of the Dilophosaur. If you provoke him, you can hope that he might flee from you. Otherwise, it will kill you with its powerful strikes or spit its greenish venom at you, which will blind and stun you, and then bite you.

How to tame the Dilophosaur

Proceed carefully when taming the Dilophosaur, making sure it doesn't hit you or your eventual mount with its venom. The dinosaur is rather slow, but due to its range it is a good idea to use a bola or trap to pin it down.

Once you've stunned it, feed it Meat or Kibble and maintain the stun with Narcoberries or other anesthetics. Since the Dilophosaur is rather small, it is not suitable as a mount. However, you can use it as a guard dog that you can also play with or it can catch other small creatures for you.

Now that you have a good overview of four helpful starter creatures, we would like to introduce you to three more, also not to be despised, creatures that are each useful in their own way. "How cute!" - is probably among the first thoughts you have when you meet an Otter. These fluffy little animals are peacefully roaming the island and spend most of their time foraging for food. Since Otters are rather trusting and curious, it is not very difficult to tame them.

Kill fish, take them in your hand and get very close to an Otter until you can feed it with it and you'll have a super cute companion that you can put on your shoulder for some warmth. Additionally, he can also catch fish for you or collect silica pearls. And with a little luck, he might even find a black pearl. When you have tamed the very passive Parasaur, he can serve you as a mobile alarm system, which warns you of all possible dangers. However, you should not expect more from him in terms of fighting. If he is attacked or his eggs are stolen, he will flee.

To tame it, you either have to chase it for a very long time and have a good speed for that and enough endurance, or you set it with a bola. Once the Parasaur is unconscious, feed it Berries or Kibble and keep it on the ground with Narcotics or Narcoberries.

The Parasaur may not be able to do much against enemies, but it's fairly fast speed makes it a good choice as your first mount in ARK: Survival Evolved, as even level 9 is enough to unlock its saddle, which requires few resources: 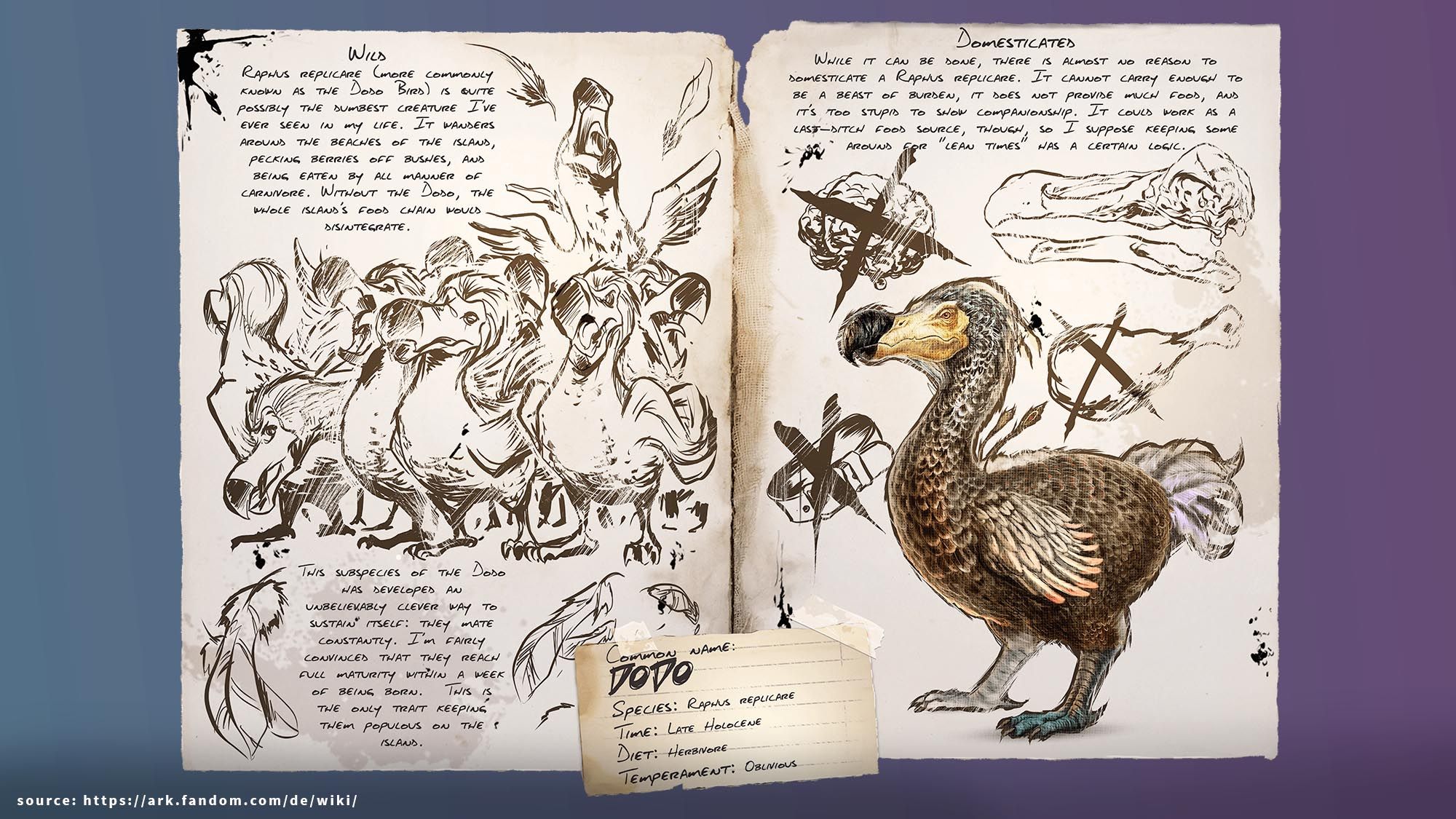 The Dodo is initially the best source of all the raw materials you need, such as meat and leather. He is very passive and will not even attack you if you steal his eggs, rather he will even run away, especially if you attack him and he survives. From the eggs of the Dodo you can get food for further taming of other creatures.

To tame the feathered bird, it's best to use a bow and shoot it with stun arrows until it is unconscious. Since the dodo has few health points, you'll have to act carefully, otherwise it might die. To do less damage, you can also just hit him until he is unconscious.

Once the Dodo is down, feed him Berries or Kibble and maintain unconsciousness by giving him Narcotic or Narcoberries. However, since he is tamed quickly for the most part, further anesthesia usually becomes unnecessary.

If you want to see all the creatures on the island for yourself now, you can rent your own ARK: Survival Evolved server here at GPORTAL easily, fast and without any contract conditions.