No more ordinary items! Let's talk about one of the rarer and harder to get items in the block world: the Minecraft beacon!

Already with the 1.4 full version, the item was brought into the game. Since then, both its appearance, its effect and its conditions have been revised several times until it finally arrived in its current state. The only question that remains is what it is and what you can do with it.

How to Craft a Minecraft Beacon?

You've been playing Minecraft for years, but you've never stumbled across a Minecraft beacon? Or you've heard of them but don't know how to find one? In any case, the answer is simple: not at all. You have to build the beacon in Minecraft yourself. And if you look at what it takes to do that, no one will be surprised that you haven't made it yourself yet. It's not that easy, and even the first step might prevent some players from ever owning a Minecraft beacon. First of all, you will need the following materials: While glass and obsidian are certainly a no-brainer, you might be wondering what a nether star is, right? This is the part where it might get tricky. You have to travel to the Nether and create the boss monster, the wither, and then kill it. Each wither killed drops a nether star. Once you've fought your way through and obtained all the necessary materials, it's time to craft. The bottom row of the crafting window is filled with obsidian; the star is placed in the middle; the rest is filled with glass and there you have your Minecraft beacon.

You have to know, though: It's not the same to be know how to craft a beacon in Minecraft, or how to activate a beacon in Minecraft. Now comes the part where your farming skills are needed, because you need some materials. If you just put the Minecraft beacon anywhere on the ground, nothing will happen. Here's what you do:

Basically, this allows you to activate the Minecraft beacon and a beam of light rises up from it. But from the base you should build pyramids to increase the effects of the full beacon Minecraft offers you! So instead of 3x3 you can build a 5x5 base and put the smaller one on top. In total, there are four different levels that work (3x3; 5x5; 7x7;9x9). Be aware, though, that the materials required are needed in quite a huge amount if you want to build the largest pyramid! Last but not least: Make sure you build your Minecraft beacon out in the open! If there are solid blocks between it and the sky, it won't work. Transparent blocks like glass or water are an exception.

Is it Worth the Effort to Build a Minecraft Beacon?

The question of whether all the effort, from wither hunting to farming the materials and building the right construction is worth it, is a valid one. What does the beacon in Minecraft bring you in the end? First of all, it should be said that it counts as a light source with its beam. In fact, it even has a light level of 15, the highest value, and accordingly lights up your world quite well.

More interesting, however, are the effects that the Minecraft beacon has on you as a player. If it is functional, you can open its window with a right click. There you can see the primary powers on the left and the secondary powers on the right. These can be used or not depending on the height of the pyramid. In total, you have six powers at your disposal, which improve your status effects. While you don't necessarily have to be able to jump higher or run faster, haste can be especially useful! With it you are able to remove blocks faster, which can simplify your work in the underground quite a bit. But beware! The effects only work in a certain area around the Minecraft beacon! This area always increases by 10 blocks the more levels your pyramid has. The highest level is 50 blocks. Upwards, the range is so many blocks that it seems pretty much endless. 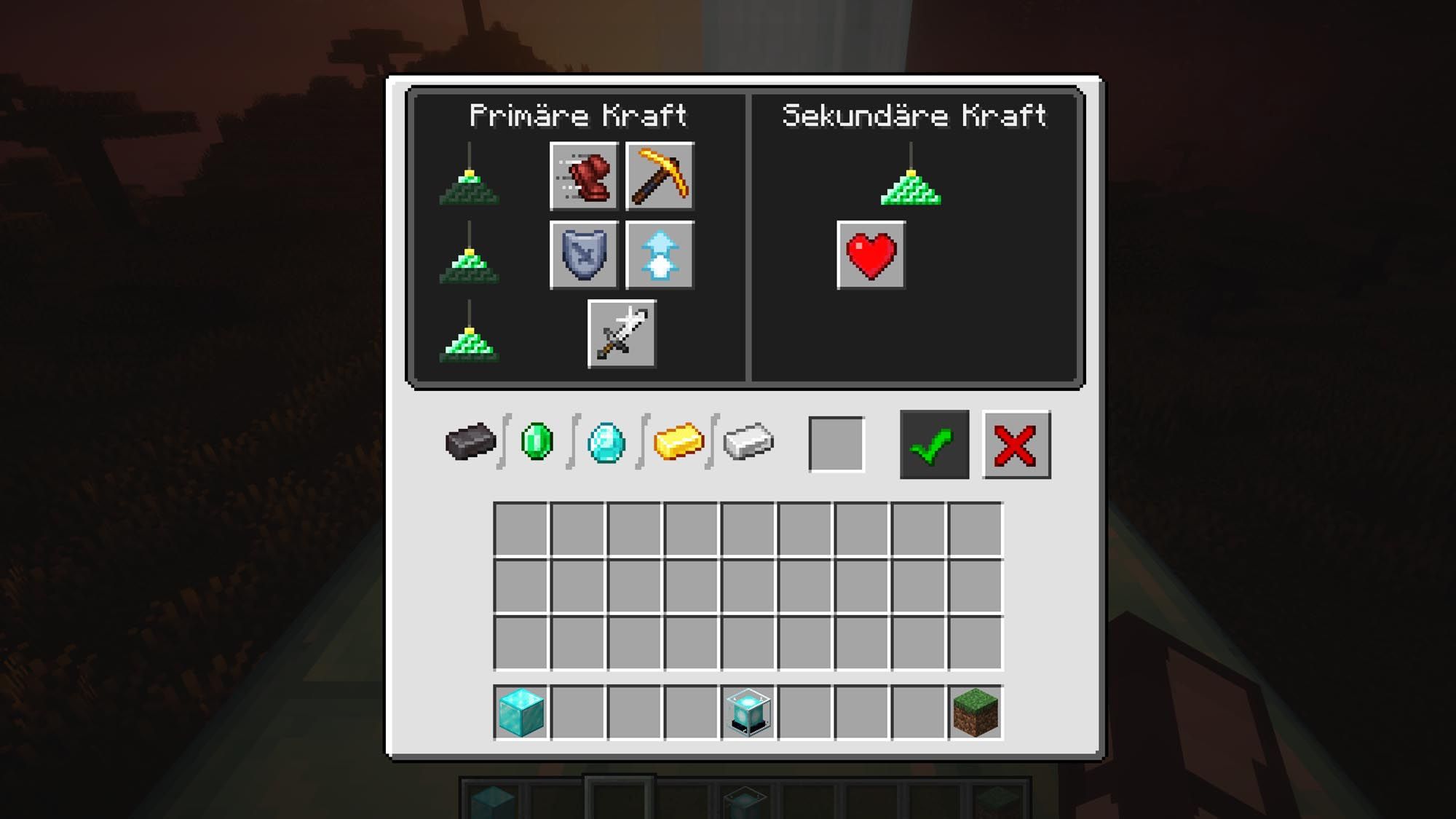 If secondary powers are available, you have the choice between regeneration or a primary power on level II. Just click on a power on the left, then it appears in the right window. There you click on it to confirm and off you go. With haste, for example, you can mine even faster. As a tribute, you must give one of the resources listed in the row below the powers and confirm your tribute. Don't worry, the resources are the same as in the pyramids themselves, only this time they are not in block form. If they are activated, the effects will run longer, depending on the pyramid’s level, and every 4 seconds they jump back to the initial value as long as you don't leave the specific area around the Minecraft beacon.

Tips & Tricks for Your Minecraft Beacon!

So if you look at it from the right angle, it's well worth crafting a Minecraft beacon. Especially if you plan to create shafts, passages and rooms underground in the shortest possible time or mine materials. So invest time and materials in the four-level pyramid and activate haste, then nothing will stop you! And to make your decision a little easier, here are some tips and tricks for your own Minecraft beacon: Try your hand at using a beacon yourself, or challenge your friends to see who can craft or activate a Minecraft beacon faster. Meet on a Minecraft server of G-Portal and let's go! Have fun!